Jump ball! A giant leap of faith leads a Kiwi to Washington

Seattle? Sam Timmins had never heard of the place.

In rugby-crazy New Zealand, he’d followed his dad into the sport before a friend recommended that big, tall Sam should give basketball a shot. He made it onto an under-15 club team and soared. 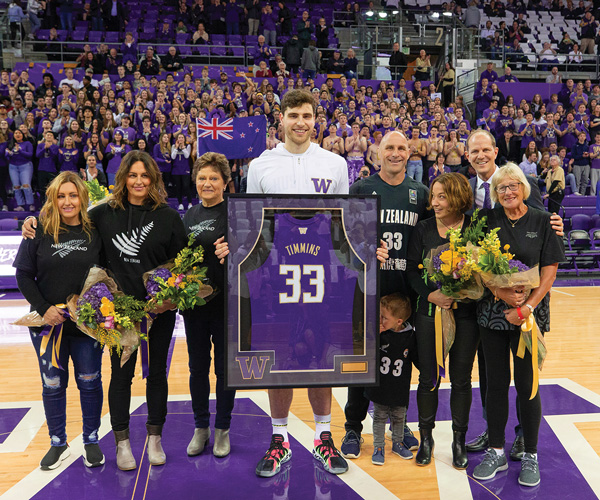 “I love how dynamic and free flowing the game of basketball is. Rugby is so much slower,” says Sam, a 6’11” senior forward with Husky Men’s Basketball. “Basketball is constant, back and forth to both ends, all the different ways you can score and help your teammates score, and the individual feeling you can have with your own game.”

The whole idea of being able to play basketball in America while earning a college education was foreign to Sam, “really mind-blowing,” he says. When a Louisiana school offered him a scholarship via Facebook, “I didn’t know what they were talking about. I was so clueless!”

Based solely on conversations with coaches, Sam committed to Washington. He took his first flight to the U.S. after he’d signed with the Huskies.

“I’d never heard of the city of Seattle before I got recruited, but I’m so glad I came here,” he says.

The city seemed overwhelmingly huge. Even the concept of fans was new. And the idea that someone would generously donate to fund his scholarship? Unbelievable.

Sam has formed a tight bond with his scholarship donors, Bruce and Jeannie Nordstrom. When his father flew to the U.S. during the holiday season last December, the Nordstroms invited the pair to dinner at their home.

“I explained to Dad these are the people who pay for my scholarship, and you know that store we were in this morning? It kind of clicked for him. He appreciated the opportunity to thank them for their selflessness, which is so inspiring.”

The communications major hopes to play pro ball and to eventually “be at a point where I can give back after basketball and then use everything I will learn over my career to help grow the sport in New Zealand.”