The legacy of Husky pride 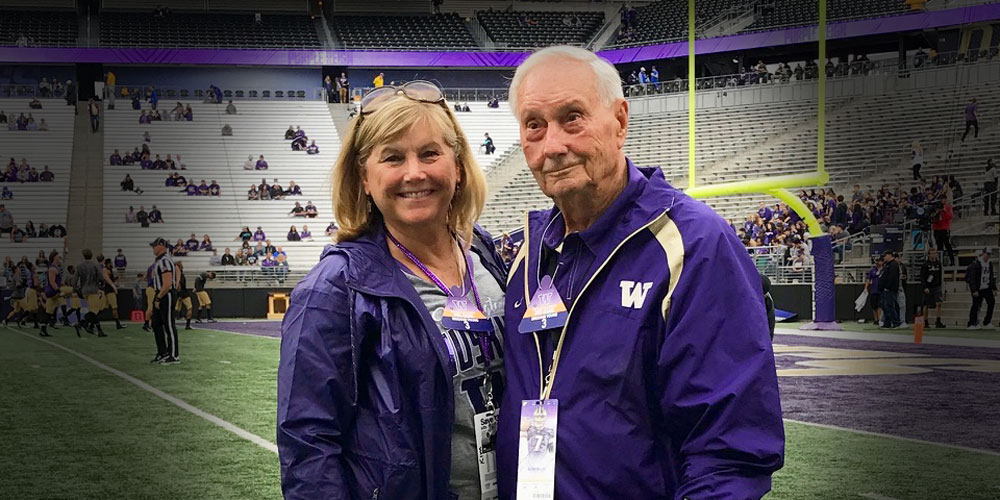 There are Husky fans who swear they bleed purple and gold. Those whose Washington roots go way, way back. And those who pay it far, far forward. The Hossfeld-Hemingway family earns all those distinctions. 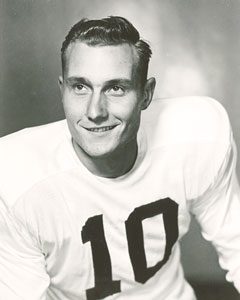 A football player in the early 1950s who still brings his letterman’s blanket to every game, who met his wife at the UW, whose family counts 18 Washington degrees among them (so far), who holds the same Husky Football season tickets he’s had for 68 years — Bud Hossfeld built a life as a devoted Dawg.

That’s why his daughter, Kimberly Hossfeld Hemingway, and her husband, Jon Hemingway, decided to honor Bud by endowing a scholarship in his name. The gift added to a long history of the Hemingway’s generous giving to Husky Athletics.

“There was no doubt that a Husky football scholarship was the most important thing I could do in my dad’s honor. He’s 90 years old now and he knows that his legacy will always live on,” says Kim, the oldest of Bud’s four daughters.

Bud earned books and tuition on a football scholarship at Washington, plus a small stipend for sweeping floors and doing other odd jobs around campus while studying for his business degree. The late U.S. Senator Henry “Scoop” Jackson from Washington opened the door for Bud to potentially attend West Point, but the young graduate of Seattle’s Lincoln High School rejected the military academy as having “too many rules”. He wanted to be a Husky.

Even when his career in insurance took him and his family all over the country, Bud remained close to his teammates, his Beta Theta Pi fraternity brothers and the close friends he made in Husky Stadium. He’s now looking forward to the 2022 season and meeting the first recipient of the Walter “Bud” Hossfeld Endowed Football Scholarship.

“I told him at Christmastime that we were doing this in his honor. He was so excited about the gift and couldn’t wait to share it with the rest of the family,” Kim says. “The UW made a big difference for my dad. All his life he’s really lived and breathed being a Husky. It gives us all so much joy to be able to give other student-athletes the chance to play football and earn an education.”

Would you like to honor someone you love through an endowed scholarship? Call the Tyee Club at 206.543.2234 to learn more.