During the 1969 football season, four Black members of the Washington football team – Gregg Alex, Ralph Bayard, Harvy Blanks, and Lamar Mills – were suspended after refusing to pledge personal loyalty to head football coach Jim Owens. In the face of racial tension and adversity, the young men stood by their actions, believed in them-selves, and stayed committed to an intense personal sacrifice for the greater good.

Later that week, before departing for a road game at UCLA, remaining Black members of the team travel party got off the buses carrying the team to the airport as a show of solidarity.

Under pressure from the public and campus groups, three of the four players were reinstated to the team just before the final game of the 1969 season, the Apple Cup vs. Washington State. In that game, Bayard caught two touchdown passes to lead the Huskies to their only victory in a 1-9 season.

Despite all of the adversity that they faced, all five of these men went on to distinguished careers outside of football. Bayard, who earned a PhD from the UW, eventually returned as an assistant athletic director in the 1990s. He has spent much of his time since then working in the child welfare field. Alex, who has run an addiction treatment facility, served 13 years as a team chaplain for the Husky football team and was key in supporting UW players after the devastating injury to Curtis Williams in 2000. Mills became an attorney in Seattle, focusing on public defender work, while Blanks, who had been injured at the time of his suspension and who was never reinstated, earned a master’s degree from Cornell and became an actor, director and playwright. Gayton earned his bachelor’s, master’s and PhD from UW. He’s worked as an FBI agent and had a long career at Boeing, among many other pursuits. Gayton has been an advocate for education reform and has served as a keynote speaker on that subject all over the world. 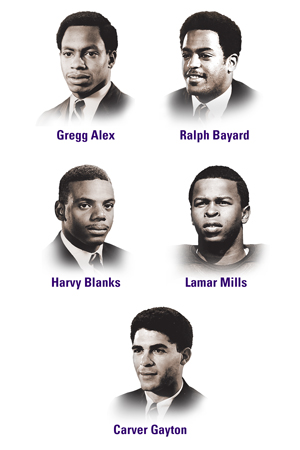