‣ Led Washington to an 11-1 season, the Pac-10 championship, and a win over Purdue in the 2001 Rose Bowl. Also helped lead the Huskies to bowl games in his other three seasons. The first UW true freshman ever to start at quarterback (1997 vs. Oregon).

‣ Finished eighth in the Heisman Trophy voting in 2000, when he was Pac-10 Offensive Player of the Year and Rose Bowl MVP.

‣ The first player ever to rush for 200 or more yards and pass for 300 or more in the same game, a feat he accomplished in a win vs. Stanford in 1999, despite briefly leaving that game due to injury.

‣ Has coached at Washington, USC, UCLA and California in the Pac-12 and is currently offensive coordinator at Rice. Served as UW’s interim head coach for the Huskies’ victory over BYU at the 2013 Fight Hunger Bowl in San Francisco.

‣ Inducted into the Polynesian Football Hall of Fame in 2019.

‣ Selected by the Minnesota Twins out of high school in the 1997 Major League Baseball Draft. 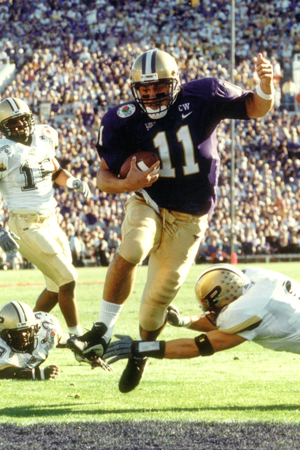