‣ Widely credited with putting UW women’s basketball on the map, both in Seattle and on the national scene
‣ In 11 seasons at Washington, guided the Huskies to the NCAA Tournament nine times
‣ Winningest coach in UW women’s basketball history with a 243-89 record
‣ Led the UW to three Pac-10 Conference championships and four second-place finishes
‣ Two-time Pac-10 Coach of the Year
‣ Had eight 20-win seasons, including six in a row
‣ Led the Huskies to the NCAA Regional Semis four times and to the national quarterfinals in 1990
‣ In 1989-90, led the UW to a then-school-record 28 wins, the No. 3 national ranking; the Huskies were the only team that season to beat NCAA champion Stanford
‣ Currently has 553 career victories as a college coach

‣ After leaving Washington, Gobrecht has coached at Florida State, USC, Yale and the Air Force Academy
‣ Coached 27 players that earned Ivy League postseason honors while at Yale
‣ In May 2018, signed a five-year contract extension (through 2022-23) at Air Force

‣ Began her coaching career at Santa Fe Springs High in California before moving on to Pasadena City College
‣ Coached Cal State Fullerton for six seasons and was a finalist for national coach of the year while with the Titans
‣ A three-year starter at USC, where she also played volleyball for two seasons
‣ Served in the Peace Corps in Western Samoa following college graduation
‣ Son, Eric, is a graduate of the U.S. Air Force Academy and is a captain in the Air Force. Daughter, Mady, graduated from Yale, where she played for her mother.
‣ Husband, Bob, spent many years working for Special Olympics 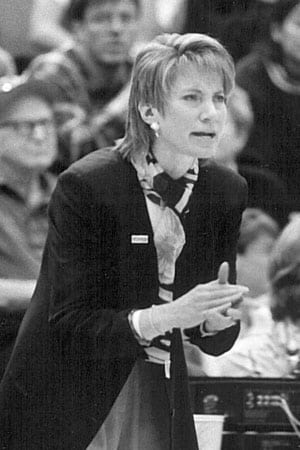