‣ Led Washington to its first winning season and bowl-game berth in in eight years in 2010, when Washington avenged a loss from early that same season with an upset win over Nebraska in the 2010 Holiday Bowl.

‣ Played in and started 40 games as a Husky. Rushed for 1,939 career yards, easily the school record to this day. Also passed for 7,639 yards and 53 touchdowns.

‣ His 7,639 career passing yards were second-most in UW history at the end of his career, and still rank No. 4. His 53 TD passes were also second-most at the time and currently fourth-most.

‣ Rushed for 986 yards as a redshirt freshman in 2007, the school record for a QB. Also rushed for 29 career TDs, most ever by a quarterback and tied for fifth-most overall.

‣ Quarterbacked UW to memorable upset victories over USC in back-to-back seasons in 2009 (at Husky Stadium) and 2010 (in Los Angeles), as the Huskies won each on last-second field goals.

‣ Selected by the Tennessee Titans as the eighth overall pick of the 2011 NFL Draft. Played four seasons for the Titans, starting a total of 23 games at quarterback, before retiring after the 2014 season.

‣ Led Ferndale High to the 2005 2A state title, finishing the season with a 14-0 record. Passed for 1,603 yards and 25 touchdowns while rushing for 1,339 and 24 scores, earning Parade All-America. Also a standout baseball player who was drafted by the Angels in 2006. 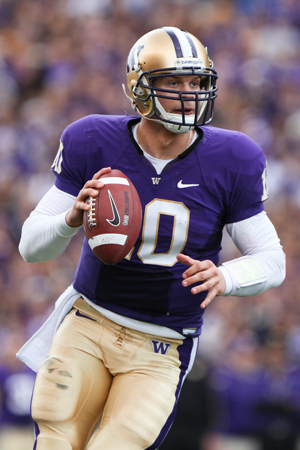