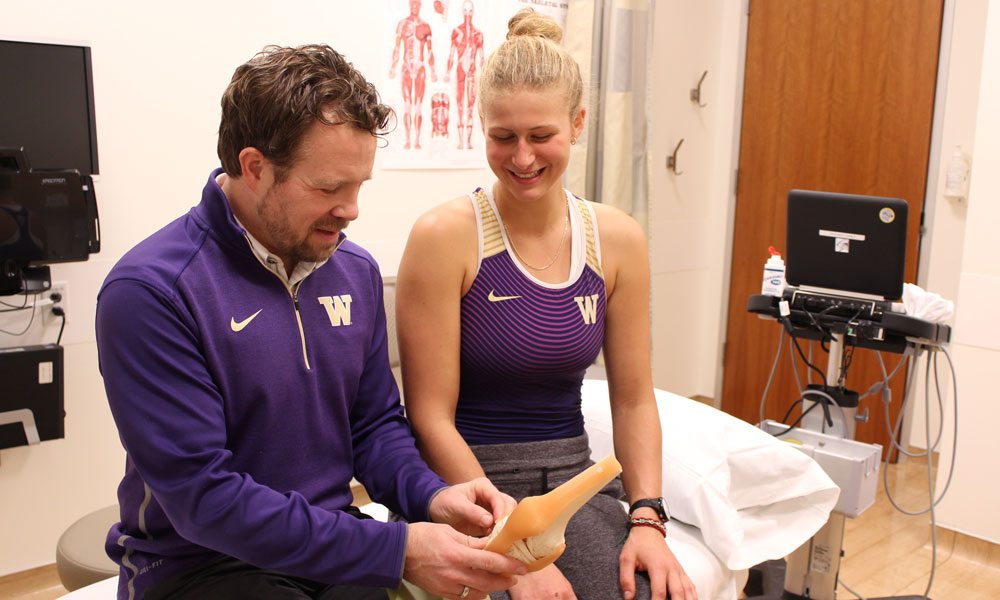 With a new championship-winning coach and a revitalized, hard-training team of rowers, Marlee Blue knew that Washington Women’s Rowing was poised to race to greatness. There was just one thing that could prevent her from stroking her way to what might be a dream season — her knee.

During practice in the fall of 2016, Marlee felt an explosive pain in her knee. She hobbled to the athletic trainer and later had an MRI that showed she was constantly dislocating her kneecap.

“I felt like maybe I would never heal and never be able to row again,” Marlee recalls.

A team approach to healing 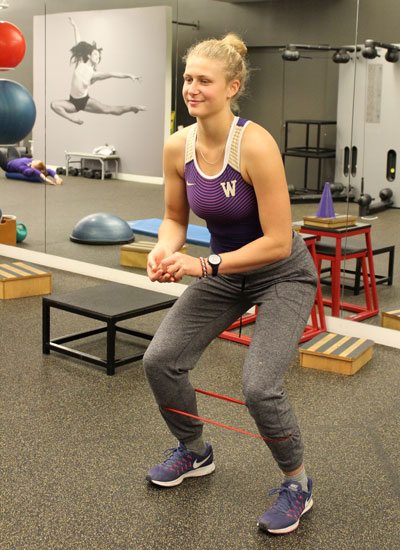 When weeks of rest followed by work with her athletic trainer failed to adequately improve her knee, Marlee turned to the UW Medicine Sports Medicine Center, located inside Husky Stadium thanks to a donor-funded remodel in 2014. Dr. Hank Pelto employed two new treatments, a plasma-rich platelet injection and nerve hydrodissection, both intended to ease pain and generate healing responses from tendons.

Thanks to this kind of world-class medical care, training resources and leading-edge technology available to Marlee and all 650 Husky student-athletes, Marlee was able to take advantage of innovative therapies that put her safely in the boat for the Huskies’ national championship season.

“Marlee is a testament to our holistic approach to sports medicine,” Dr. Pelto says. “She’s worked with a physician,  a physical therapist who specializes in rowing, her athletic trainer, a chiropractor, and even wore spandex leggings with sensors in them to analyze how her muscles are firing.”

Director of Athletic Training Pat Jenkins explains that such a team-oriented approach to Marlee’s healing is standard operating procedure for the Huskies.

“Having the coaches, strength coaches, athletic trainers and doctors on site leaves very little room for the student-athletes to escape what they need to do,” he adds. “It’s a comprehensive approach to steer them in the right direction so they can continue to go to class, continue to compete — and, if they do have a hiccup along the way whether that’s injury or illness — that we expedite their recovery so they can get back to the business of being  a student-athlete.”

Preventing injuries is a priority 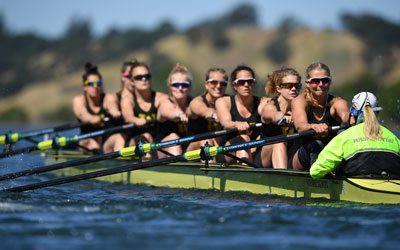 Long before student-athletes set out on the water, the field or the court, they undergo routine physicals, baseline concussion assessments, and baseline EKGs to detect underlying heart conditions that might not only inhibit competition but threaten their lives.

For Marlee and the rest of her team, injury on the water can become serious matter if not addressed immediately. Dr. Pelto and his colleagues have incorporated a new procedure using ultrasound to diagnose rib stress fractures before they can develop into serious breaks. They’ve also created a new protocol for responding to on-the-water health emergencies for rowers.

“For Dr. Pelto and Coach Yaz and our trainers, the number one priority is to get us healthy and keep us healthy — not just to push us back into the boat, but for 10 or 20 years from now, our whole lives,” concludes Marlee, who envisions continuing to compete long after she graduates with a degree in political science in 2019.  “It’s great to be in an environment where people put the student-athletes first.”

Your gifts to The Competitive Edge Fund enable UW Athletics to go above and beyond in providing world-class medical care and other resources to student-athletes. Thank you!