The UW’s Champion for women 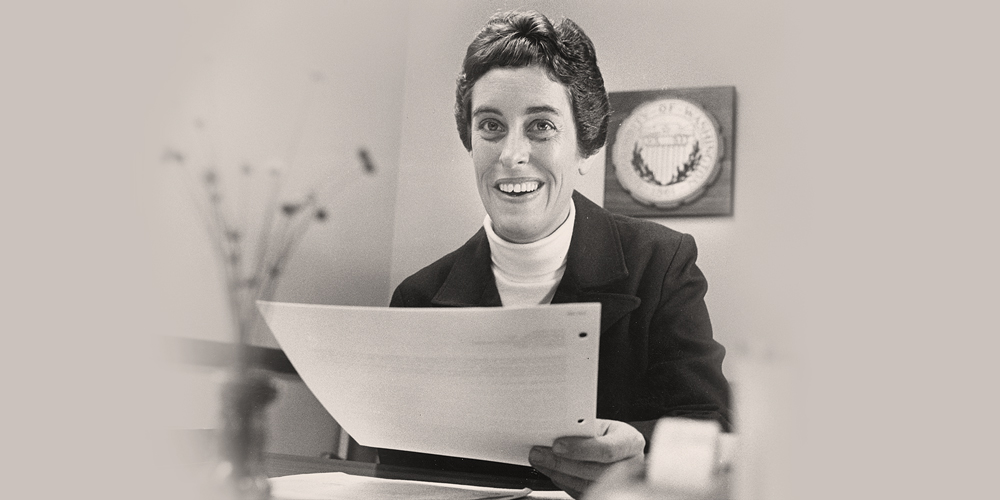 In her three decades at the University of Washington, Kit Green almost single-handedly turned women’s athletics from an afterthought into a priority.

One of just five Athletic Department administrators to earn spots in the Husky Hall of Fame (and the only woman), Kit’s legacy is alive in every glorious moment of victory for UW women’s sports today. She is now 90 years old and living with dementia. It’s up to us to remember her incredible impact.

Kit came from a successful New York family with roots in 18th Century America, according to her former partner of 34 years, Barbara Daum, who continues to manage Kit’s affairs. Her grandmother majored in “physical culture” at Oberlin in the early 1900s and her mother graduated from Wellesley. Kit earned a bachelor’s degree in physical education at Skidmore College and a master’s at the University of Colorado.

She arrived at the UW as a P.E. instructor in 1960. By 1969, she’d taken charge of the student intramural program — the sole option for female athletes since the Athletic Department sponsored only men’s sports. Shortly after Title IX passed, Kit was promoted to Senior Associate Athletic Director, tasked with integrating 11 women’s sports into the department.

“At the outset, only limited funding was provided by the University,” Kit recalled in 1999 when she received the Nike Lifetime Achievement Award for Women in Sports. “We started with no scholarships, no lockers, part-time local coaches, no trainers, one set of uniforms, private cars or school buses for transportation … just the bare necessities.”

Fostering transformative change was challenging. Kit was often frustrated by the department’s “hyper machoism,” noted Barbara, and its unwillingness to hire female coaches and dedicate more funding to women’s teams.

When Women’s Basketball needed a new coach in 1985, Kit was pressured to hire a male assistant coach of the Men’s Basketball team. “Kit refused and thought she’d be fired,” Barbara recounted. Kit wanted to hire a woman named Chris Gobrecht. The University’s administration supported Kit, and Chris Gobrecht became one of the most successful and admired coaches in Husky history.

“I am most proud of the fact that I was able to persevere and survive under often difficult circumstances, including a sometimes-hostile environment, and was instrumental in creating a viable program of intercollegiate athletics for women at Washington,” Kit said in the 1999 interview.

A life, a legacy

Despite the adversity, Kit’s career advanced. Her responsibilities grew to include oversight of 20 women’s and men’s sports. She retired in 1994 and remains passionate for all things Husky. “Her heart is in the growth that continues exponentially today,” Barbara said.

That heartfelt love is actualized in Kit’s ongoing financial generosity to the programs she advanced. She recently created an endowment for Women’s Rowing, donated to commemorate the 50th anniversary of Title IX, and made other generous contributions.

“She’s very proud of the development of women’s programs and the support they receive from everyone in the Athletic Department. It’s a wonderful feeling for her to help them out now,” said Barbara.

If you’d like to reach out to Kit, who turned 90 on June 3, email your greetings to KitGreenHuskies@gmail.com.